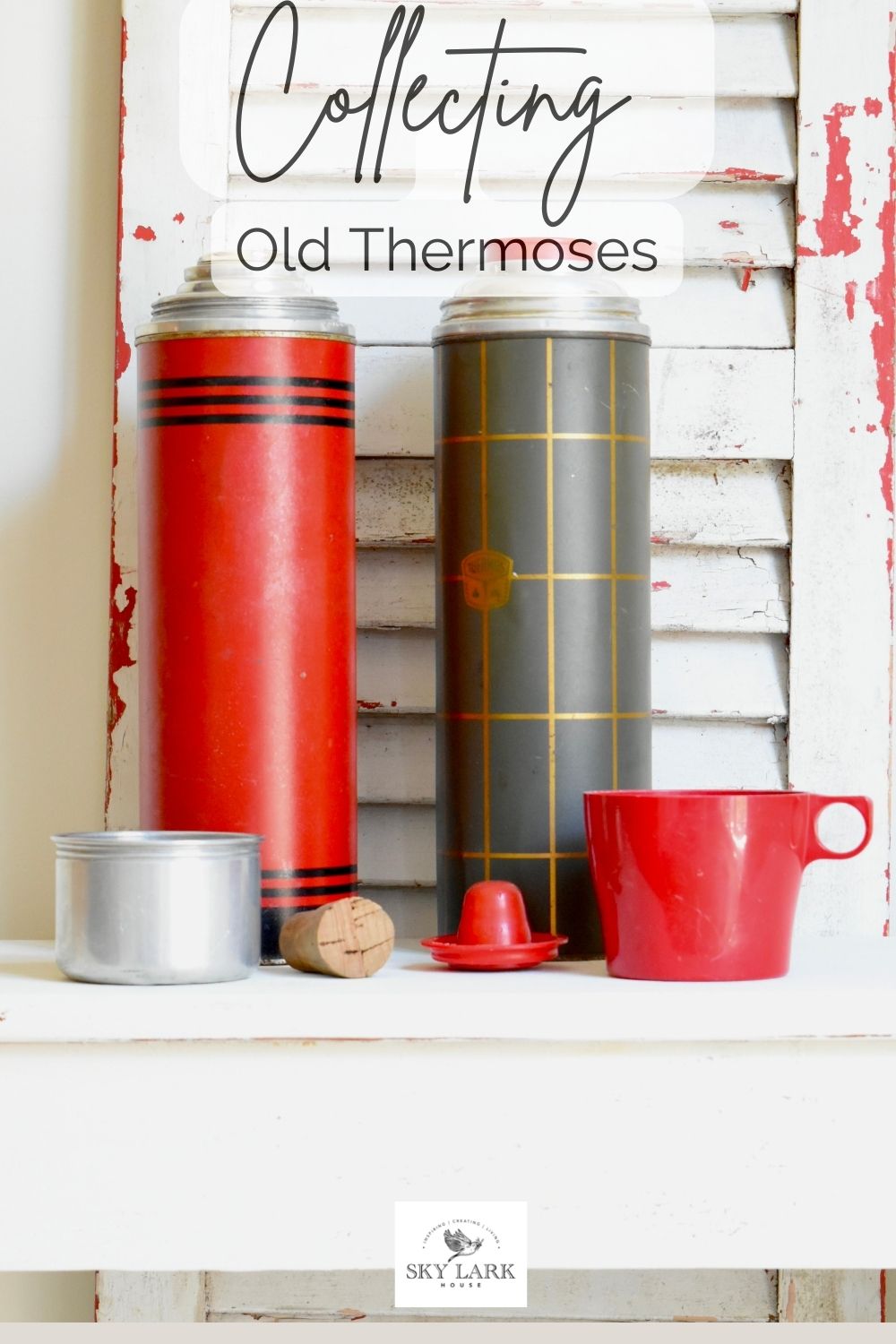 In this post I share information about collecting old thermoses – estimating their age, where to find them, and how much they cost.

A quick note that this post includes affiliate links and I will receive a commission from items you purchase but at no additional cost to you. I am presenting you with my own opinion and honest review of the information provided. If you want to read the entire disclosure statement, please click HERE.

This is part of the series on summer collectibles. If you haven’t been following along, there are certain vintage and antique items that are synonymous with summer. So, I have been sharing information about these collectible items over the course of the last several weeks. I give you some background information about the item, such as where it was made, its history, where you can find it and how much it generally costs.

When I think of summer, it brings back memories of eating outdoors, specifically it reminds me of picnics. Picnics at the beach, at the park, at the outdoor concert, or even at a ballpark. Anytime we had a picnic, we always brought a thermos. Are you going hiking? You will need a thermos. Are you going fishing? Pack a lunch and thermos. If you go camping, you need a thermos and s’mores (obviously). Thermoses are an integral part of summer experiences. That’s why today’s post is all about collecting old thermoses.

Typically thermoses come to mind when you want to keep a fluid hot – like coffee or soup. However, they can also be used to keep fluids cool – like lemonade or iced tea. This is what makes thermoses so useful in the summer.

Above is a small collection of thermoses that I am bringing to Stone Soup Antiques. The age of these thermoses varies so I am going to give you some tips on how to identify them.

Estimating the Age of a Thermos

Thermoses were first produced in the early 1900s. There is a fabulous and in-depth article about the history of thermoses by the Kitchen Kapers. It’s definitely worth a read. The first thermos plant was located in Brooklyn, New York!

Earlier Thermoses will have the following features:

If you find a thermoses with these two attributes it was likely made in the1950s.

In the image above, you can see the glass lining which was used to hold the liquid contents. You can also see the cork stopper that was used. This thermos is likely from the 1950s because it has both of those features.

You can also tell quite a bit about a thermos if you look at the stamp on the bottom.

The image above reference thermos bottle 2884 which had a ribbed aluminum body, was a half pint size and was made before 1970.

During this time, thermoses started using plastic liners. The glass liners used previously could be fragile and periodically broke. Although they could be replaced, their fragile nature was problematic. During the 1980s, steel liners were produced with more regularity. There is a fabulous New York Time’s archived article about the evolution of thermos.

Colors and styles of thermoses is another way to estimate their age. Most metal, red, or blue thermoses tended to be produced mid century. These are the more typical vintage thermoses with stripes . In the 1970s, there was a transition to avocado green, oranges and floral patterns. In the 1980s, thermoses were produced with lunch boxes and included a wide variety of prints, scenes and characters from TV shows and movies.

I have found that those thermoses from the 1950s and 1960s are generally the most popular. Many of them still can be used today. (Just be cautious if you have a thermos with a glass liner). People really like collecting the old plaid patterns and the mid-century patterns.

Of course, the Thermos Company has an extensive history of their products on their website. There are some great photos of old thermoses.

I love that these old thermoses are still affordable. In most cases, you can buy an old thermos for less than $30. On average, I would say they cost between $15 -$50. Of course, as with any collection, there are those that are priced higher because they are rare and/or are in pristine condition.

I recognize that not everyone lives in close proximity to Ballston Spa, New York where Stone Soup Antiques is located. So, I have linked some old thermoses that I found on Etsy below.

On the whole, old thermoses are fun to collect because they are still fairly easy to find, are still affordable and don’t take up much space.

Old Thermoses impart a sense of nostalgia when you use them. I love trying to collect all the patterns, styles and sizes.

There is a multitude of patterns to choose from.

You can pin the image above or below if you want to bookmark this post for future reference.

I wish you happy hunting on your next antiquing or thrifting trip. May the vintage thermos gods be with you.

If you liked this post about collecting old thermoses, here are some other posts in the same series you may enjoy.